Women have been removing some (or all) of their body hair for as long as records show. Egyptian women were known for shaving their heads, 17th century sex workers would wear pubic wigs to hide disease and to avoid pubic lice, even stone-age women would use sharp stones and shells to shave their faces.

Now, in the twentieth century, some women are taking-a-stand against tradition and choosing not to remove their body hair.  To remove, or not remove body hair: that seems to be the current question. Female celebrities such as Miley Cyrus and Lady Gaga have been featured in the Talko’s article titled ‘15 celebs rocking the hairy armpit trend’. Is this  just this season’s hottest look? Or is this really a step towards liberation and freedom of choice?

Of course when we think about feminism and the great struggle for equality, attitudes toward body hair are perhaps not the biggest issue on the list.  But from the perspective of a 17-year-old, privileged, white, cis woman like myself,  I feel negative reactions toward female body hair are a prime example of how misogyny continues to stain our culture.

I want to start by making it clear,  I’m pretty hairy. In order for me to mirror our media’s hair-free standards of beauty,  it would take hours of waxing, shaving and lasering (nearly every part of my body). I know that other women, especially women of colour and trans women, have the same issue.  If I decide to go “unshaven”, I am not just making the decision to ignore my underarms, pubic hair, legs, I am deciding not to shave my stomach, face, backs, arms…

I spoke to my friend about her experience of body hair as a woman of colour:

‘I definitely remove my hair to look as good as white people do because with darker hair it’s so much more obvious in places that white people wouldn’t expect, like your lower back or your tummy, so shaving makes me feel more normal’, she says. ‘I would definitely not feel comfortable not shaving for a while and then just wearing shorts, because no one else would look the same as me. Their ‘natural’ and my ‘natural’ is so different. I remember when I was younger and didn’t shave I felt very uncomfortable and compared myself to my friends a lot.’

‘But to me, it’s just an insecurity, like how some people worry about their skin, I worry about my hair. It’s just another thing to think about. But I’ve got to the point now where it’s part of my life.’

I asked her whether she felt her body hair was intrinsically linked to her identity as a woman of colour, and she replied, of course. As an Asian woman, she said, hair removal is a big part of my life, I don’t resent this.

Being hairier than most is something that comes with her identity. She mentions the significance of having her mum help her with hair removal and how having that connection helps…”I know my mum understands”.

There is no doubt that there is a deep connection and empathy between ‘hairy’ women when they meet-up and talk about body hair-issues. All of us have experienced  a similar pressure to be hairless, and to fit in.

‘I know I should feel comfortable with my hair and not shave or anything, but I just prefer to. I prefer to look like everyone else’, my friend concluded.

As women and as feminists, I feel we should support her decision. Whatever she does with her body, it’s her choice.

The main reason some women are now against hair-removal is because they see it as an ordeal women go through specifically in order to please men. Personally, I have always felt more judged by my female friends when I haven’t shaved.

Perhaps women think that it’s their duty to shave and that shaving should be a joint effort, a joint experience of womanhood. Perhaps when those women see my hairy legs, it threatens their sense of self, purpose, femininity? Who knows? 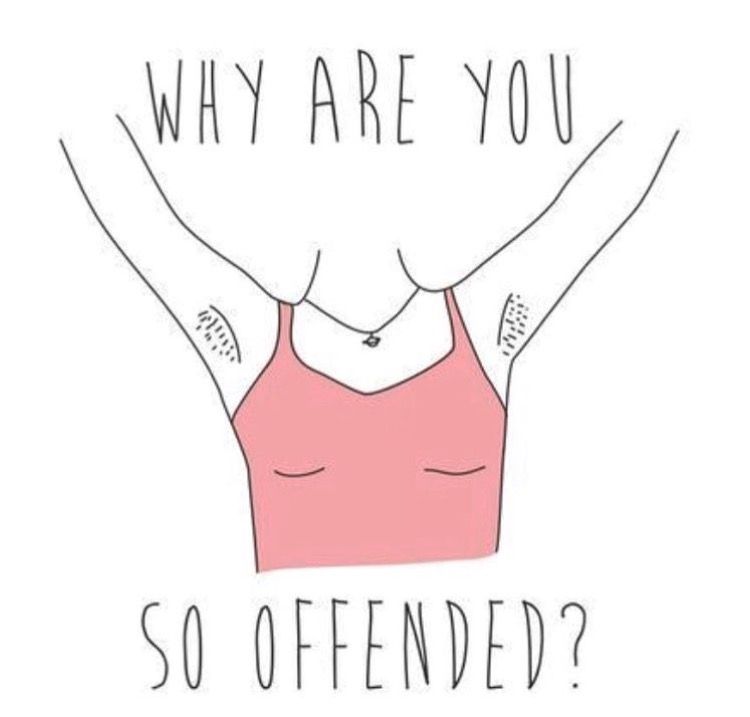 I began to wonder how men feel about body hair. Are men judging me too?  I spoke to my boyfriend about this issue, who, as a 17-year-old rugby player, experiences the lad-culture we assume to be responsible for shaming female body hair. Here is what he had to say:

‘I think the main attraction with the removal of hair is the effort you’ve put in. It’s more about the fact that you’ve bothered to shave than the hair itself. But that’s the same for wearing a nice outfit- it’s nice to know you’ve thought about it.’

He tells me he hears negative and oppressive comments about girls and their hair all the time, when it actually comes down to it though, he doesn’t reckon many of his male friends would turn their nose up at somebody else because of their body hair; the bravado and ‘locker room talk’ disappears behind closed doors.

‘It really shouldn’t be an important thing, but I wouldn’t be comfortable speaking to my rugby mates about their views. Everyone’s real opinion is squashed by social expectations’.

He condemns this lad culture and sums up our chat by saying ‘Body hair isn’t a bad thing. If it makes you feel more comfortable getting rid of it, do that. If you want it, keep it. At the end of the day, if you’re with someone who really cares about your hair that much, don’t be with them because they clearly don’t care about you as a person and more about your appearance and that’s not what’s important.’

Has it always been like this? Or is this really just a millennial trend? I spoke to my mum about growing up as a teenager in the 80s:

I ask her what reaction that received.

“I actually got quite a lot of respect for that, probably mostly from women. Men who were bothered steered clear of me- people just accepted that that’s what I did.”

Nowadays she says people her age are fighting an uphill battle. “My body ‘perfection’ is less perfect than it ever was, but I also see this as a chance to be a role model and show other women and girls that its normal to have body hair.”

My mum also offers the point of view of someone who lived in France, Germany and Spain in the 80s and 90s. Interestingly, her experience with body hair was vastly different in each.

“I think I was heavily influenced by spending long periods of time in Germany in my early twenties- at that time it was very normal for women not to shave their legs or armpits, which was very liberating in a lot of ways and influenced me to not shave as well. It felt alien to what i’d experienced in Britain and opened up so many possibilities for me.”

She admits that with globalisation and the rise of the idea of ‘the perfect body’, she suspects that things aren’t so liberal in Germany for young women today, but that at that time, it was simply not part of the culture to shame female body hair. “We’re just so much more hung up about it in Britain” she says.

“I also remember in Spain seeing women in rows outside the swimming pools publically plucking each others leg hairs, which seemed ironic to me given that they spent so much money on removing their hair in private. But I think in Spain it’s just accepted that women have really dark, thick hair and it was a constant, ongoing maintenance job to stay hair free and swimming-pool-ready.”

“I would be delighted if this current trend (to keep body hair) were the start of something bigger. It does seem strange that in this era of empowerment and equality that women put so much pressure on themselves or society to be hair-free.”

By the end of our conversation I felt like I had reached some-kind of a conclusion in my own mind. We should all be more supportive of one another. Feminism is about equal choice and equal possibility for all. Personally, I would like to be able to keep my body hair and not have to explain myself to other girls or guys. We need to stop questioning and condemning others for their decisions. Shaven or unshaven, we need to start concentrating on the bigger challenges ahead.